Hello world!
since some weeks dm brand ebelin now has a konjac sponge in their portfolio. I did hear about these sponges since some time on other blogs but i never wanted to buy one online, because i did not want to make an extra order just for such a tiny thing. But now i was even more happy to find them just in the drugstore around the corner 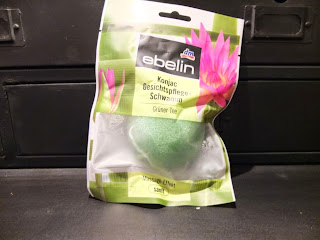 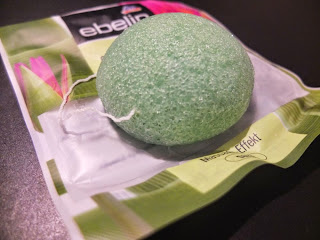 The sponge from ebelin is somehow special because they sell it inside a plasic wrapping and already soaked with liquid. There are no ingridients printed on the package, so either it is just water or they put so less antidegradant into the package that they don't have to name it. When i cut off the package i smelled only a slight smell of something. it could either be the green tea or that antidegradant. Before i used the sponge i did wash it under warm water. I used it after i removed my make-up with alverde make-up cleaner. I did not use any aditional soap or tonic. The sponge itself did not smell, it is very soft and somehow squeeky. It does not produce any kind of foam (except some tiny bubbles when you press out the water quickly). After the use my skin feelt fresh, soft and clean. I did not have the feeling that it needs some moisturizer. I will give you a long-term-use review after the time when you have to exchange it.

For now i kind of like the sponge itself. But i really dislike the extra plastic wrapping and the unclear state about the used liquids to soak the sponge before selling. I also did hear that rossmann is also selling now konjac sponges but in dry strate, i will also try this one out when i get to a rossman store.

Did you also already discover the konjac sponges in the drugstores? Are you also using a konjac sponge? Where did you buy yours?
Hugs n Kisses
Madame Snowhitepink

Posted by Madame Snowhitepink at 08:00

Madame Snowhitepink
Hi there, i'm a 28 year old girl living in Berlin. I love fashion, beauty and make up as i also love all kind of geeky, nerdy and science stuff. I am only 1,2m (47.24 inch) tall, which makes life sometimes complicated. But here i just want to tell you that this all doesn't matter if you just rock trough it ;)